From www.livinginthefuturetense.org, Chapter 9.
Is the Ownership and Control of Knowledge an Issue?

“The digital age has produced significant changes in our everyday life. But, the disruptions we are most familiar with – Facebook, Google and Amazon.com – are but the tip of the iceberg. Largely hidden from awareness is the transition into a new era where business, education, employment and the role of government will significantly change, all within single lifetime.”
Edward Renner, Forums for a Future

There is no precedent for how to make the transition from the present into the new digital age. In the future, the current source of wealth and power -- land and resources -- and the means to achieve them -- legions and mercantilism -- will no longer be effective. This will make everything negotiable, including the purposes wealth and power will come to serve. These two issues – means and purpose -- must be brought into conscious awareness to safely navigate passage into the new digital era.

The Means to Power and Wealth

The means to power and wealth for the first 5000 years of human history was the control of land and sea. This required soldiers and ships and was geographically defined. For the next 500 years, natural resources and industrialization was the means to wealth and power through mercantilism defined by material physical objects. Now, for the next 50 years, ownership and control of information and knowledge through transactional exchanges in virtual time and places will become the new reigns to wealth and power.

This is the reason the current assumption is that knowledge and information are intellectual property: A period of protection is provided by patents (20 years) and copyrights (70 years after the death of the author) to give the creator an exclusive monopoly to make money as a reward for their creation. The belief has been that this incentive will stimulate innovation that would otherwise be absent, to the advantage of everyone.

While intellectual property rights might seem like a natural extension of land and resources as the means to power and wealth, there are collateral consequences which call into question whether these extensions are any longer appropriate. 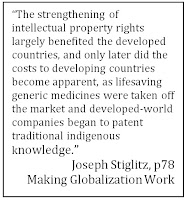 As a simple example, drug companies have used their patient protection to make large profits which have supported lobbyists to influence government policies that promote profits at the expense of health. In free-trade agreements, economic development for poor nations has been made contingent upon the enforcement of US patent protections when those countries are in no positon to reject foreign investments. Without these special arrangements big pharmaceuticals would be required by market forces to sell their pills at a lower price; as a result, health becomes an expensive commodity. Trade has never been truly free, it is regulated by governments, which is why identical drugs are less expensive in Canada and cannot easily be imported in to the US.

In education, the role of public schools and colleges has been the primary means for achieving equality of opportunity and upward mobility in the US. However, this essential role for supporting democratic values is threatened by the commodification of education. Reductions in government support for higher education have opened the path for venture capital to flow into every aspect of public education: Tuition increases resulting in high levels of student loan debt as a personal responsibility, for profit on-line learning, digital textbooks, adaptive learning technologies, and the privatization of public schools. All of these, and many more trends, serve private interests, not the public goal of elevating general knowledge to be an effective civic mediator of wealth and power.

But even more disruptive is the impact on employment and the human condition. Geoff Colvin in his article in Fortune (Oct., 22, 2015) described how controlling knowledge and information allows for off-loading the cost of land, resources and labor and degrading their value: The world’s most valuable retailer (Alibaba) holds no inventory, the largest provider of accommodations (Airbnb) owns no real estate and the largest car service (Uber) owns no cars. Owners of physical assets are forced to compete with each other by cutting wages and accepting slimmer profit margins, creating a race to the bottom for the majority of people.

Wealth and power will continue to accrue to those who own and control transactions, rather than the material products. Although Apple is considered a manufacturer, it produces no products; it has capital assets worth $172 billion, but a market value of $639 billion.  In contrast, Exxon Mobil has most its value ($330 billon) in physical assets ($304 billion).

At issue is whether we create a universal market economy where everything only has value as an economic transaction; or, whether we must retain essential processes of living which are not reducible to commercial ownership.

The simple case is the belief that neither health nor education is an economic commodity, and that the process of business is more important than the products of pills, textbooks and the occupational skills of individual workers. If these trends continue, health, mind and body will become a commodity in which the human condition itself is a derivative of financial products.

At the more fundamental level is the belief that profits should come from the mass distribution and use of new innovations. Simply, the purpose of knowledge and information is not to serve as an instrument for financial gain, but for an improvement in the human condition. As a practical example, rather than profit from a pill for $1,000 for one person, make it available for $1 for 1,000 people. One basis for the belief that modern knowledge and information are common wealth is that the pace of change is so fast now that the time line from innovation to full application must be immediate. The foundation for this potential has resulted from most creative work being paid for by public research grants conducted by non-profit institutions, and supported by a context of public investments in universal education, and the arts and humanities. Public domain is the new context.

The larger choice we have to make is whether the role of government in the 21st Century is to continue to facilitate the transition to information and knowledge as property, or to reconceive whether all means for wealth and power, including the air, land, sea and natural resources, should also be administered as common wealth. Are not we all – peoples and our institutions – temporary tenants on a planet we neither invented nor created.

This new digital era of human history will provide an opportunity for an alternative human social history. The danger, if it does not, is that this will be the final chapter for the physical existence of the planet and for the continued evolution of the human condition. Can human intelligence take human kind to a higher level, or will we crash because we cannot let go of economic value as the ultimate measure of human progress? Is this as good as it gets -- the grand finale of the great human experiment?

Posted by Edward Renner at 11:40 AM No comments: