Living in the Future Tense

http://forumsforafuture.blogspot.com/2012/03/living-in-future-tense.html
This essay may be freely reprinted and reproduced.
The New American Way of Life:
Living in the Future Tense
Edward Renner
How should we be thinking about the major issues facing the nation for the 2012 Presidential election?
Global warming is producing profound changes that will have far reaching effects on life on the planet. The world economy is near collapse. Population growth and growing poverty is about to put 100s of millions of the worlds' people into famine. The Middle East is exploding and Western nations are caught up in it. World political and financial systems are failing, including some in the West. The growing differences between the haves and the have-nots are sparking large-scale street protests that are turning into armed conflicts, even in the US. Going over the edge of any one of the brinks will have reverberating effects on world order and personal well-being.
These are neither Democratic nor Republican issues. They are factual descriptions of our current reality, for which we need practical solutions, not ideological philosophies.
For over 5,000 years, roughly 100 adult lifetimes, very little change took place from one generation to the next. Then over the next 500 years, roughly 10 adult lifetimes, the rate of change started to accelerate, and over the last 50 years, roughly one lifetime, the magnitude of change seems infinite – without limits. 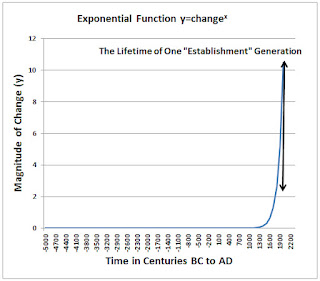 Population is one illustration. When I was born there were 2.2 billion people in the world, today there are 7 billion. This is but one example of an exponential function in which the time required for something to double in size gets progressively shorter. Nearly every aspect of our modern life is described by the graph of exponential change, as examples:
·         The emission of greenhouse gases.
·         The amount of resources we consume each year, and the amount of waste we create.
·         The proportion of the population no longer engaged in agriculture.
·         The national debit and the deficit financing of our military capacity and interventions.
In the lifetime of one person we have come to the end of business as usual. We can only live exponentially in an infinite world.

In our finite world there are absolute ceilings reflecting the carrying capacity of the planet. We have to bend the exponential growth curves to fit under these ceilings. We have scientific knowledge of what actions are required to do so. 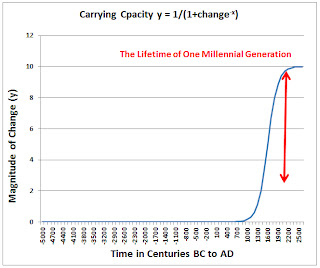 The US could lead a global turn-around by developing sustainability priorities and technologies beginning with energy and ecology. Doing so would change the global marketplace, and would place American ideas and technology in the forefront of innovation and change. Being the first economy of the future, our new technologies could sustain a whole new American Way of Life.
Globalization has changed everything.
Socially, a new American Way of Life is one in which the government is responsible for the health and economic security of its citizens, not multi-national corporations beyond the reach of national regulation. Politically, international accommodation is essential, not reliance on superior military capacity. Economically, the general welfare is at the expense of profits, not the reverse.
These are structural adjustments, not ideological philosophies. They are the practical implications of two mathematical functions. In plain language, if we are going to have healthier food, we will need to have fewer soldiers and more local organic farmers; it means we cannot fight avoidable wars and still go shopping.
To not live exponentially is to understand that we cannot have everything we want. Rather, we must start living in a finite world where our behavior is dictated by what we need to have for the remainder of our life, and for the lives of our children.
Unusual times require an unusual intergenerational response.
Of the charted 7,000 years of human progress, two thin 50-year bands of one lifetime on either side of 2012 will be our defining moment. As a democracy, and as the largest economy of world, the people of the USA will get to vote between the two mathematical functions confronting all of humanity. We, more than any other nation, may be the authors of human destiny.
To the extent there is divine purpose to the American Dream, may God Bless America, and the New American Way of Life. However, if it is up to each of us, as some believe, then power to the made-in-America, Occupy Movement.
Either way, in common purpose, it is an exciting time to be alive in the USA.
Professor Renner teaches in the Honors College at the University of South Florida. This essay is based on his podcast series “Forums for a Future” at www.kerenner.com.
Posted by Edward Renner at 11:12 AM No comments: