The Future of Work

“The Jetsons are a family residing in Orbit City…George Jetson lives with his family in the Skypad Apartments: his wife Jane is a homemaker, their teenage daughter Judy attends Orbit High School, and their early-childhood son Elroy attends Little Dipper School. Housekeeping is seen to by a robot maid, Rosie, which handles chores not otherwise rendered trivial by the home's numerous push-button Space Age-envisioned conveniences.”
Wikipedia, August 2015

The low level of job creation and lack of gains in hourly pay for private-sector workers after the financial crisis should not come as a surprise to anyone. We need to stop thinking that private-sector job creation is the path to an economic recovery. Instead, we need to be talking about the distribution of work and wealth in the economy of the future; this is the path to a sustainable recovery.

Remember George Jetson from the 1962 TV series, with his driverless car and his one-hour per day, two days a week job? Then, the expectation was that benefits of technology would be felt by everyone. Everyone would have more leisure time, more happiness and stronger families. We’d all experience a New Renaissance of art and culture. The future was going to be less work and more play, and it was only one lifetime away! 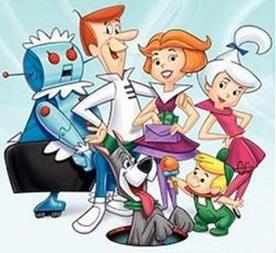 Although it was never made clear when in the future the Jetson’s lived, it is now clear we are on the verge of actually making that transition from the present to the future. Today, cars can park themselves and Google has experimental driverless cars on the California highways. Robots like George Jetson’s Rosie have already started to replace workers. But, most important of all, we are well on the way toward the end of work as we know it.

The increased productivity resulting from technology will continue to eliminate jobs and reduce labor cost for each article produced and every type of service delivered. Pumping our own gas, using ATMs and auto-checkouts are just the beginning. The elimination of entire occupational careers in the immediate future will be just as true for jobs requiring higher education and technical skills as those requiring less education and simple skills.

At the high end, more than half of all higher education faculty are now part-time. These adjunct professors get paid by the course and do not have job security or benefits. A report from the University of California based on U.S. census data found that 25% of adjuncts received some sort of public assistance, such as Medicaid, food stamps, cash welfare or Earned Income Tax Credits. This highly educated group is now among the working poor.

At the other extreme are health, homecare and fast food jobs, paying at or near minimum wages. Half of these workers are also on some form of public assistance, similar to Adjunct Professors. To qualify for these subsides a family’s income must be below an eligibility criterion. For the school lunch program – which last year served over 30 million children -- it is 130% of the poverty line. Today, someone would need to work 63 hours a week at minimum wage for 52 weeks to earn the $23,850/year required to support a family of four at the poverty line. But, a family of four cannot live on that amount of money

This elusive search for an economic recovery from the financial crisis of 2008 has presented us with the opportunity for a real choice: We may either continue on the current economic path of fiscal austerity, tax cuts, low interest rates and deficit spending intended to stimulate private sector corporate growth to create more jobs, or we may chose the political alternative of creating a public-works, social-development path for actually making the transition into a future that would fulfill the expectations that inspired the Jetsons TV series in 1962.

If we continue on the current path, the aging faculty will never be replaced. The next level of savings is for a few elite universities and well funded information technology companies to use the new electronic communication capacities to create high quality practical courses that can be administered locally by low-paid facilitators. When we reach this point, information and knowledge increasingly will be a commodity under the control of those who own it. 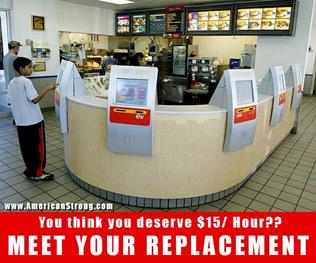 For the fast food worker the future is no better. They are constantly reminded that they are lucky to have a job at all. There is now a commercially available iPad point of sale system that allows a credit card payment at the table. You pre-pay your order from the online menu and a runner delivers your food. In a restaurant in Japan, the runner is a robot who looks remarkable similar to Rosie.

The profit from the increased productive per hour of human labor will continue to go into the pockets of those who own the knowledge and information responsible for the technology, not to those who apply it.
In the US, the top one-tenth of 1% now have as much wealth as the bottom 90%; this is similar to just before the great Depression of 1929. All of the gains in prosperity of the middle class following the end of WW II have now been reclaimed by very wealthy. We need to find an approach more appropriate for 2015 than 1945; the economic growth that put people to work following the war is not a 21st Century solution. Today, environmental constraints, globalization and post-industrialization technology will limit private-sector job creation and wage growth in the US.

Currently, we are once again creating an economy in which most of the people have little money to spend. Unless we reverse the current strategy, the economic engine will stall, creating hardship and social unrest as it did before. However, choosing the alternative political path of public-sector social development will require a radical change in how we think about the distribution of work and wealth, and about the economy of the future.
The diminishing amount of private-sector work will have to be shared. In the short-term, to replace the lack of traditional job growth and inadequate hourly wages, public-works projects can provide meaningful employment to create the infrastructure required for a new energy efficient green economy of tomorrow. The New Deal, after all, was the start of the way out of the great depression of 1929. In the long-term, public-sector entitlements, compensations, responsibilities and civic activities will have to expand to fill our social needs, to occupy our time and to constructively engage our minds. Sports, recreational facilities, music, art, hobbies and civic participation will become the new social fabric to replace roads, bridges and other physical definitions of human progress
.
However, for this to happen in the economy of the future, a much larger proportion of the profits from information and knowledge must fall to those who apply it, not to those who own it. Simply put, the accumulating wealth from information and knowledge must increasing belong in the public domain, rather than a commodity for personal and corporate financial gain. Redefining the purposes to be served by wealth is a social value to be implemented through the democratic political process. At any given time,the nature of the economy is a function of our social beliefs and political choices.
To actually make such a transition to the Jetson’s Utopia, the role and functions of government needs to be much different in the future than they are today. Perhaps the most mind altering change will be the necessity of expanding, not reducing personal entitlements. We need to believe that a social, not economic, fabric should be the basis for describing the human condition. A starting point for making a gradual transition to this future economy could be the introduction of a mandatory 40-hour maximum workweek at a realistic living wage as the minimum, thus sharing the existing work and creating a more inclusive economy.

Life in this alternative future will be no less busy, just very different. The concept of a balanced life not dominated solely by economic values has other precedents

Manfred Max-Nerf, a third world economist and university professor, worked with the Peace Corps. He tells the story of a village where 10 women would each spend the whole day making one basket. The Peace Corp volunteers showed the women how they could make 20 baskets a day if they specialized their tasks and formed a production line. When the volunteers return several months later the women were using the new production methods, but still only making 10 baskets a day. When asked why, they replied: “Now we have so much more time to spend with our children.”

The women in the village did not necessarily lack industriousness, they may simply have used good judgment. Our current obsession that the sole purpose of information and knowledge is to drive gains in corporate profitability may not be industriousness, it may be simply be a matter of bad judgment. In its most basic sense, the new lifestyle in the village enabled by the application of technology is fundamentally similar to the anticipated life-style for the Jetsons, all within the time frame of a single life time – that of the Millennials.

The shift over hundreds of centuries from land and resources as the source of new wealth, to information and knowledge in the 21st Century, provides us with the political opportunity to define this new source of wealth as a public resource, not as private property. Politically, establishing knowledge as open-source and public would allow human progress to be measured as improvements in the human condition rather than as GDP units of economic growth.

By choosing a public rather than private-sector strategy for personal economic security, traditional work as we know it will no longer need to dominate our life and define our sense of self. What an exciting time to be alive, simply by starting to live in the future tense.

Edward Renner is a retired university professor who writes on the modern human challenge of how to live sustainably and peacefully on a crowded planet in the 21st Century. A prepublication copy of his most recent book is available at www.livinnginthefuturetense.org. He may be reached at erenner@livinginthefuturetense.org.
Posted by Edward Renner at 7:59 PM No comments: