For too many, working more means making less

In my leisure time, I do woodworking.

Why would anyone work longer hours for the same amount of money?

Yet, my situation is similar to the one faced by most low wage workers who are often criticized for making the same choice as mine.

Today, someone working at minimum wages (discounting any overtime differential) would need to work slightly more than 63 hours a week for 52 weeks to earn the $23,850/year required to support a family of four at the poverty line.

But, a family of four cannot live on that amount of money. Some of the short-fall is made up through subsides such as food stamps, Medicaid, and the free school lunch program – which last year served over 30 million children.

To qualify for these subsides a family’s income must be below an eligibility criterion. For the school lunch program it is 130% of the poverty line. Even if it was possible to work more than 63 hours, it would simply remove the eligibility and leave the person no better off in the end. 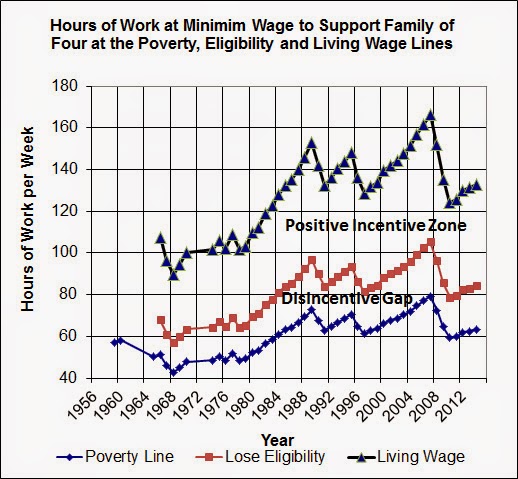 The poverty line is an official government statistic calculated each year to provide a consistent indicator of poverty. Because the official poverty line under estimates real needs, eligibility for assistance is frequent set as at some larger percentage of the poverty line. The eligibility line show in the graph is 130% which is the 2014 criterion for the free school lunch program, established by Congress in 1966. The Living Wage value of 210% of the poverty line was determined for 2014 by using the MIT living wage calculator based on official regional economic data.

Historically, the criterion for a living wage has been a matter of debate. The best current indicator is the MIT living wage calculator. It is based on the actual living cost in different regions of the US. The results show that a couple would need to work 136 hours at current minimum wage to cover the average cost of providing a low-wage family of four with food, clothing, housing and medical care.

Of course, it is impossible for two adults to work a total of 136 hours each week for 52 weeks each year and take proper care of their children. But, it is no longer just the fast food industry and retail stores, such Wal-Mart, that do not pay a living wage. It has become a national standard. A recent study by the Labor Center of the University of California found that “nearly one-third of the country’s half-million bank tellers rely on some form of public assistance to get by.” This is at a cost of $900 million dollars per year in the form of food stamps, tax credits, Medicaid and the Children’s Health Insurance Program.

However, if the minimum wage was increased to about $15.00/hour, then two adults working 63 hours per week between them would make a living wage for a family of four. At this pay rate there would be a positive incentive to do so. That is what the striking fast food workers are asking for.

But, this should not be the end of the story.

My lifetime of work provided me the dignity of a pension, now to be topped-up by earning minimum wage for continuing my leisure time hobby.

In contrast, for the low wage worker there is no pension or leisure time. The 63 hours are most often composed of juggling several part-time jobs that intentionally do not include health insurance nor provide for retirement.

The families of 30 million children who need a subsidy for their child’s lunch is a national embarrassment. It isn’t that we can’t afford to pay higher wages. The profits at the nation’s banks topped $141.3 billion dollars last year. The public subsidies, the indirect costs of poverty, and excessive corporate profits and executive pay, such as the $552,000 median salary of the CEOs for whom the tellers work, are the real expenses.

Transferring some of these actual costs into living wages for workers would be good for the economy. Fewer people working long hours, but earning a living wage, would result in more jobs for others, little unchosen unemployment, and a heathier and more equitable society.

The US has one of the lowest levels of minimum wages and highest levels of poverty of all the developed countries in the world. Most similar countries avoid the high financial and social costs of extreme poverty simply by requiring a respectable minimum wage for work, and by providing some universal entitlements, such as health care and mandatory retirement benefits, that effectively supplement everyone’s wages an equivalent amount.

Sure, a hamburger might cost a little more, but other public and personal expenses would be far less. In the end, the total cost to the economy, by most calculations, is actually less expensive than what we have now.

Where has the dignity and shared prosperity gone which 40 hours of work at a living wage should provide?
Posted by Edward Renner at 9:16 AM No comments:

When More of a Good Thing Is Bad 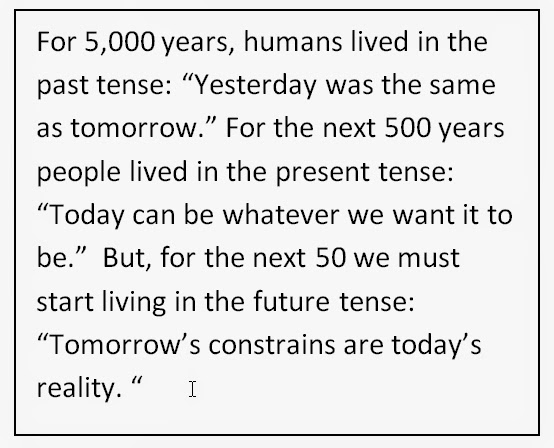 If something is good, surely more must be better. But it is not necessarily so. It is true that when you are alone or don’t have any money that a friend or any amount of money is very valuable. But, the more you have of either, the less valuable any additional friend or money becomes, just as a meal for a hungry persons is more important than for someone well fed. What we often don’t fully appreciate is that both too little and too much are extremely damaging, but in very different ways and for very different reasons.

I recently received a friend request from someone I did not know.Why would a complete stranger want to be my friend? Maybe, it was because they liked my last column? A new Fan!

So, when is a few friends not enough, and a large number too many?

The typical Facebook participant has between 100 and 190 friends: These include close friends, colleagues, some personally unknown associates, and even some family. With some, they have a genuine reciprocal relationship, for others mainly one-way communication.

This number is very similar to the 150 people that social science research has show that most people can manage in a meaningful way. Facebook is a much more immediate and personal than e-mail, which in turn was more immediate and personal than the Post Office.
However, to collect 5,000 friends has little if any redeeming social value. In fact, what is true for the distribution of friends on Facebook is also true for the distribution of wealth in the US. 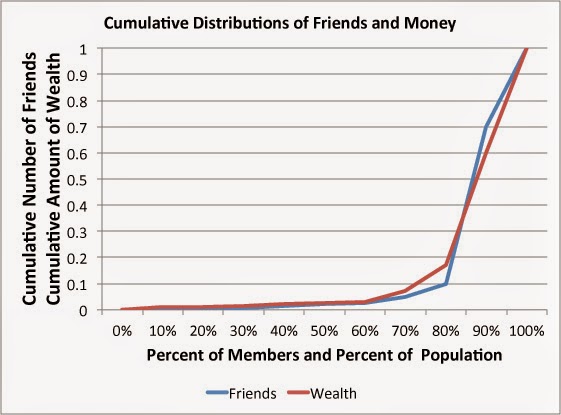 The Distribution of friends on Facebook and the distribution of wealth in the US are identical functions. For both groups of people the upper 10%, and in particular the upper 1%, have an excessive number of either friends or amounts of money


The important difference is that the supply of potential Facebook friends is endless, and individuals with an excessively large number of friends are the primary victims of their own excess: Too many superficial friends may be the means to loneliness no less than too few friends.

In contrast, there are only so many dollars in the economy. The supply of wealth is limited. How wealth gets distributed does make a difference. In this case, the primary victims are the 90% of individual who do not have an equitable share of the wealth.

At the poor end of the distribution a small additional amount of money makes a big difference for the person with little money. At the rich end of the distribution any additional amount of money does not make any noticeable difference.This fact is neither new nor radical. In classic free-market economic theory it is the “law of diminishing marginal utility.” But, this well established economic principle seems to have been forgotten by the current economic policies that have allowed the excessive accumulation of wealth by the1%.

One way to correct this distribution is to increase the minimum wage to be an effective living wage, including adequate food, shelter and health care. However the very rich have used their money and influence to blocked this simple reform. Clearly, their excess has not trickled down as the promised alternative; indeed, just the opposite.

The damage this false argument has caused is great compared to the economic stimulus and improved quality of life that would result from a greater degree of equality.

In a democracy, individuals are generally free to behave in self-serving ways as long as it does not harm others. That is why a few people are free to choose to distribute their social energy to accumulate an excessive number of meaningless friends.

Perhaps, the question we should re-consider is whether, like Facebook, to permit a few people to accumulate excessive meaningless amounts of the national wealth, when the result is so harmful to the national level of well-being.