A version of this essay was published in the Tampa Bay Times on Sunday, May 19, 2013, P1-2. This essay may be reproduced, reprinted and republished.

Saving Our Planet:
Why Climate Change Has Not Inspired Action


Edward Renner
While Climate change has entered the national conversation, it has not received popular support nor resulted in a cooperative international approach. New measurements show that the climate-changing gas carbon dioxide is at the highest atmospheric concentrations -- 400 parts per million – in at least three million years. And yet a recent Gallup poll shows that only a minority believe that global warming will “pose a serious threat to them or to their way of life during their lifetime.”


One possibility is that the focus on climate change has let us, as individuals off the hook because there is not, really, anything that each of us can do personally that will make a difference. Yet, we know that something very significant is happening to the environment about which something must be done.


With such a disconnect, and so little political will, action seems impossible. But there is a way. If we would shift our focus from climate change to the concept of Carrying Capacity, then are there many necessary things we can do ourselves, over which we have direct control, including holding our elected officials and global corporations accountable for specific changes in public policy.


What is Carrying Capacity?


Carrying capacity is a well-established biological concept: It is the maximum population size of the species that the environment can sustain indefinitely, given the food, habitat, water and other necessities available in the environment.


Of course the planet is far more complex than a rowboat. But only in two very simple ways:


First, the impact on the planet of adding one more person to the population of the US is the same as adding 10 people to the population of Mexico. This is because the average American uses more resources and makes more waste than the average Mexican. Similar to the row boat, it is not the number of people that is important, but their combined weight. For the planet, this is the Effective Population; it is the number of people multiplied by their average impact which is the total burden of the human footprint on the planet.


Second, nature is not a static situation like a row boat floating in still water. Nature is a dynamic system in which all the elements influence each other over time: When a growing population cuts down trees to clear land to grow food, the result is soil erosion decreasing the amount of food to feed the increasing number of people who are cutting down the trees. In a similar way, the row boat, when exposed to stormy weather rocks and dips in ways it did not when in still water.


In the past, individual societies have collapsed when they exceeded the biological capacity of their local geographic area. When an area and thus society collapsed, other areas and societies emerged. Today, however, human activity is damaging the carrying capacity of the entire planet, and there is no other place to go. On August 22 we will have used as much resources and created as much waste as the planet can replace and absorb in a year. At that rate, it takes 1.4 planets to support our current life style.


We are depleting the planet of its resources to support human life. That is the issue. 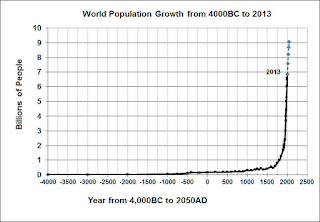 Clearly, there is a theoretical limit to how long the effective population can continue to increase all the while reducing the biological capacity of the planet necessary for living. Growth is finite.


When collapse occurs in nature, there is a “tipping point” in which the accelerating demands produce a rapid decline in capacity. The process is similar to the over-crowded row boat which, with the addition of a small amount of extra weight, starts to take on water, which, the moment that happens, causes the boat to take on even more water, and it quickly sinks. Once the tipping point is crossed, neither the boat nor nature can continue to support life. For thousands of years this has not been an issue for the planet. However, it is an issue for those of us alive today. We are the ones who will be responsible for bringing our planet to the tipping point.


In nature, the rapid collapse occurs due to “Forcings.” These are incremental changes of one element that forces additional depletions in all of the other elements, which in turn trigger even greater reductions in each of the other elements. This leads to an accelerating Titanic-like downward spiral toward total collapse.
Jared Diamond in his book Collapse has chronicled how past societies which existed and thrived for hundreds of years – some more than a thousand – have collapsed over the period of one lifetime when a single forcing -- such an extended drought --- pushed the society beyond its tipping point. Today, climate change is Nature’s mechanism for causing forcings – drought, desertification, famine, water shortages, and dead seas, to name a few. The social, political and economic consequences of forcings are the ingredients for societal collapse: migration, social unrest, war lords, starvation, economic recession and growing inequalities in which a very few are rich and powerful while the vast majority are poor and weak. Civic order cannot withstand large numbers of desperate people. 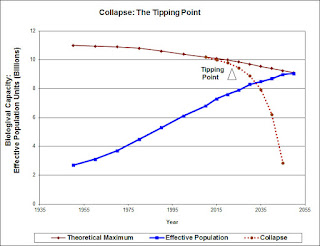 
Fortunately, unlike the ways of nature, carrying capacity is something we can do something about. We have knowledge and control over all of the elements responsible for staying within the carrying capacity of the planet. We can measure the biological capacity of the planet to provide the resources we use and to absorb the waste we create. We already know how the growth of the effective population is exploding at the same time as our resources are shrinking. Although we do not know exactly where the tipping is, we do know that it is within the lifetime of the majority of people alive today. Given a six thousand year human history on the planet, that is all we need to know. The choice is ours.


The impact of total distances traveled and the efficiency of transportation, the amount and sources of energy used, and what we eat and how it is produced can each be divided into sub-categories, which can be further broken down into the hundreds of specific everyday actions over which we have personal control, such as using fewer plastic water bottles, driving one less mile or eating less meat.


A small percentage of people making regular small contributions, and encouraging progressively more people to join with them, can have a large cumulative effect.


However, while these individual efforts are all necessary, they alone are insufficient. Rather, they must be our daily reminder that public policy issues, such as effective mass transit to replace personal automotive commuting, the infrastructure of alternative energy sources and national policies independent of the short-term self-interest of big agriculture, big oil and multi-national corporations are essential.


This challenge is of particular relevance to those of us living in the US, because we are putting in jeopardy our way of life, far more so than China who is our major competitor. We are the biggest offender in the world of per capita over use of natural resources. We have more to lose than any other nation if, collectively, the human race exceeds the carrying capacity of the planet. 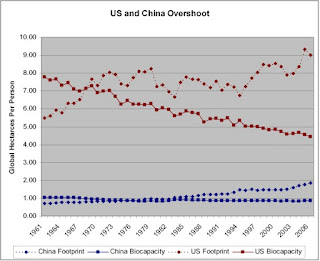 We have become distracted from the necessity for institutional and political accountability by the emphasis on the abstract threat of climate change over which we have little direct personal control. Climate change is simply the most important of Nature’s mechanisms for causing forcings. In contrast, carrying capacity can be documented down to the number of gallons of gasoline, diesel and aviation fuel refined; the tons of fertilizer and pesticides used; the number of wind farms created; and, the BTUs of coal and oil that must be remain in the ground. These are all subject to public political control, and the policies required to regulate these events are known.


What is absent is the social and political awareness to shift our focus away from the abstract event of climate change, and our necessary but insufficient personal responsibility for it, to the collective and essential government and corporate accountability for specific and measurable policies and practices of not using more resources and producing more waste than the planet can replace or absorb in a year.


The political, economic and social discussions we need to have are not whether we need shift the burden from primarily a personal responsibility to one of greater government and corporate accountability, but rather the most feasible ways to do so.

Edward Renner is a Professor in the Honors College of the University of South Florida. He may be reached at kerenner@usf.edu. An introduction to his University level course, Forums for a Future, is available in pdf format from USF at http://tiny.cc/7ij7fw, or free in iBook format from iTunes at http://itunes.apple.com/us/book/invitation-to-forums-for-future/id533089665?mt=11.The environmental data is from the Global Footprint Network data base: http://www.footprintnetwork.org