In Quality of LIfe US Trails Peers


Who Is Fairest of Them All?
Edward Renner, PhD


If we compared the United States with the other rich, developed, market democracies of the world -- such as France, Germany, United Kingdom, Australia, New Zealand, Norway, Denmark etc. -- where would we stand?


Of all the nations, the United States, by far, has the largest degree of income inequality between the rich and the poor. As the Occupy Wall Street movement has publicized, 1% of the people have 90% of the wealth and the top 400 have as much as the 159 million people at the bottom. 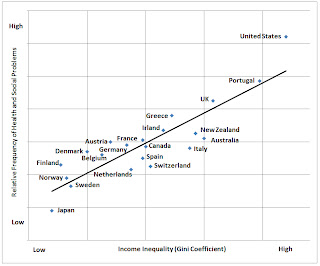 These are the facts that describe our current reality. This is the information, not ideological beliefs, on which we must base our conclusions.


When the Gini coefficient becomes too large a nation becomes less efficient. The very rich use their wealth to corrupt the political process by gaining undue advantage, in the US through lobbying and campaign contributions. The number of people living in poverty increases and government support for social programs is reduced. The result is a breakdown in the social structure; as the quality of schools, roads and services decline people become less satisfied, less healthy, less cooperative and less peaceful.
It has not always been this way. For over 200 years we were the model of equality and prosperity. Now, we have become the exception to our own ideals. This is in direct contrast to how we see ourselves.  We have lost our perspective on the quality of life in our own country.
We can recover the historical standing we have had as the American ideal. The mechanisms responsible for smaller disparities of national income and wealth are well known. Countries with higher levels of health and happiness, and fewer social problems have:
1.       A steeper progressive tax system
2.       A higher maximum marginal tax rate.
3.       Government sponsored universal health care.
4.       A government sponsored social safety net.
5.       Government regulation which balances the competing forces of corporate power with the general welfare.
6.       A willingness to limit standing military capacity, and the use of armed force only as an intervention of last, rather than first, resort.
All six have been part of our own history. It is not that we do not know this, but rather, we have lost the will, and perhaps the capacity, to use them. 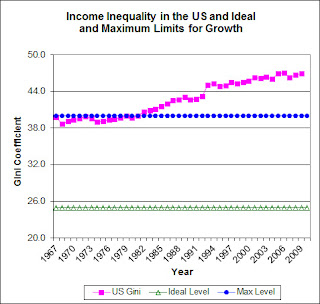 The Gini coefficient for the US has been steadily increasing above the upper limit for efficiency since 1980. This is when tax cuts for the wealthy, and corporate and financial deregulation, became fashionable as our political philosophy. In a market economy, the lower limit for efficiency is a coefficient around 26. At this ideal level, inequality is minimized, without yet triggering the disincentive loss of creativity and productivity associated with socialism.
The Occupy Movement is a wakeup call to our civic consciousness. We have become an exception to what we have always believed ourselves to be.
Will we hear the wakeup call, and take America back, or continue on in our 30 year snooze.

Professor Renner teaches in the Honors College at the University of South Florida. This blog is based on his podcast series “Forums for a Future” at www.kerenner.com
Posted by Edward Renner at 6:00 AM 1 comment: 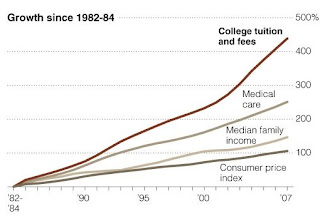 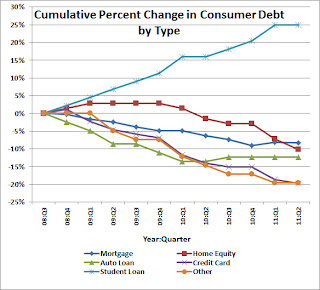 When too many students owe more than their degree is worth, or lose their ability to pay the debt, this financial bubble will burst -- as it surely will with suppressed wages and a 9.1% unemployment rate. Similar to the housing bubble, we will be asking all over again, how could this be?
The answer is the same for student loans as it was for mortgages.
The college loan industry is following the same path as the mortgage lenders by recruiting students who have small chance of success. They end up with debt and no degree. These loans are similar to the toxic mortgages. Other students take out loans on the promise that economic growth will make the loan affordable in the future. The grim reality is that this is no longer true, for student loans as well as mortgages. The illusion of economic growth by financing the present through debt is over, for individuals as well as for governments.
The student loan bubble is an even a more dangerous symptom of the failure of our national political process than was the mortgage bubble and the resulting financial crisis of 2008.
Education, science, health, roads and all of the other things that have made the American Dream possible, and made our country the envy of the world, are not commodities, they are public investments in the common welfare. My student’s kidney, and all that it symbolizes, is not, cannot and should not become a commodity.
Student loans are the only type of debt that cannot be discharged in a bankruptcy, except under rare and unusual circumstances. The financial industry that created the student load bubble has successfully lobbied for laws that exempt such loans from the capacity to be discharged. With accumulated late payment fees and interest charges they are a more toxic financial “product” then the mortgage crisis.
It is not an individual’s responsibility to have to choose between debt and one kidney, or between forgoing education to avoid debt. It is, however, the responsibility of government to be a buffer between the public good and predatory Wall Street practices of creating artificial financial “products” to make money at tax payer’s expense, or as cumulative debts to be paid for by our children.
Protecting the quality of public life is the primary responsibility of government. That is why we pay our taxes. We are not going to solve our social issues of public education, health and human welfare by reducing government. It is our government, and it is our civic responsibility to have it have it serve the end of human progress; this is the definition of a democracy.
It is not the primary function of government to further the accumulation of power and wealth by corporations, and the control of government by the wealthy; this is the definition of a plutocracy.
The choice between the two is ours to make. It will be the defining choice of our lifetime.
This is what the “Occupy” movements around the world are about.
Professor Renner teaches in the Honors College at the University of South Florida. This blog is based on his podcast series “Forums for a Future” at www.kerenner.com
Posted by Edward Renner at 5:07 PM 2 comments: