Occupy Wall Street: The Way We Were and the Arab Spring

Occupy Wall Street:
The Way We Were and the Arab Spring
Edward Renner, PhD
In 1960 the largest age group in the United States was under five years of age. The next largest groups were those 6 to 10 and 11 to 15. These were the Baby Boomers.
The smaller, immediately older 15 year age group of 16 to 29 matured in the wake of World War II, and the Cold, Korea and Vietnam wars. Many of these “children of war” were veterans attending college as mature learners; others faced military conscription through the Selective Service Draft.
Together, the two groups accounted for 51% of our National Population of 180 Million. The Median Age Was 29. Their motto was, “Don’t trust anyone over 30.” They did not like the future they saw in front of them. They saw an "establishment" locked into dead ideas from previous eras.


They orchestrated and witnessed the Civil Rights and Anti-War Movements. They marched, protested and created music which gave voice to an alternative optimistic vision of equality of opportunity in a Great Society. This "Greening of America" was an inspiration for the rest of the world.
We were what others hoped to become.
Now, 50 years later things have changed. The age distribution of the Arab Spring is structurally similar to that of the United States in 1960. Well over half of the populations of Egypt, Libya and Syria are under 25 years of age. 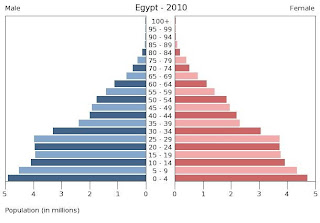 The youth do not like the future they see in front of them. A small elite establishment exercises excessive authority and wealth in the face of limited opportunity and wide spread poverty.
It is 1960 all over again. Similar to the way we were, they do not trust anyone over 30.
Except this time it is the United States, and much of the Western world, where the New Establishment is the baby boomers and the children of war who are still the single largest age group. 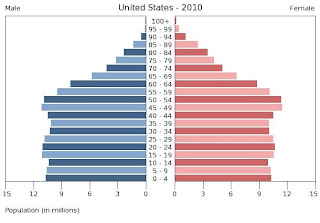 The “American Spring” of 1960 has turned into the American Winter of 2010. As a nation we are locked into old ways of thinking. Now, the New Establishment does not trust anyone under 30 as having a clue of how to live a responsible (non-digital) life. Our youth, who are currently coming of age, do not have the same space in front of them as did their parents and grandparents in 1960.
Perhaps it is us in the United States, with a large majority of our population over 30 years of age, who are out of step with both our children and with the rest of the world. We are trying to hold on to a past that no longer exists. We are trying to protect the dead ideas of unfettered capitalism and individualism, and the large wealth and income disparities they have fostered, exceeded only by Brazil and Mexico.
We are no longer what others hope to become. We have become what the emerging countries of the world are protesting against.
Just maybe, it is us, two endless but unpaid for wars later, global warming, an unsustainable national debt, a broken civic process, and the Tea Party as our potential response, that is the problem.
After having made a mess of the open opportunity we were given fifty years ago, it may be time to start seeing our own future in the faces of the current millennial generation.
The Facebook fueled, “Occupy Wall Street,” movement may be the first sign of a new American Spring. Are we ready?
_____________________
Professor Renner teaches in the Honors Program at the University of South Florida. This essay is based on his podcast series at: www.kerenner.com
Posted by Edward Renner at 5:36 AM No comments:

The Millennial Challenge
K. Edward Renner
In 1988 the very last of “Baby Boomers” joined the labor force. As a generation they had an open path to the future.
The Establishment was receding into the background. There were relatively few dependent old people and a large number of dependent children.
It was the culmination of the Modern Era. The wave of Boomers exemplified living in the present tense: Anything was possible, now.  As a nation we lived as if there was no tomorrow. 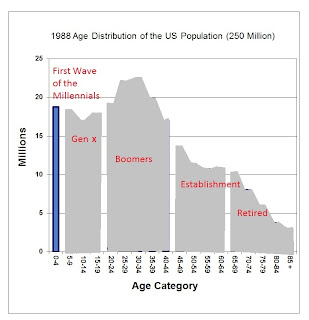 Although we did not know it at time, the first of what would become the Millennial Generation was also born. They would be separated from the rest of the population, not just by age, but also by a digital divide. For them, the world as they know it has always been digital.
By 2008 the population of the United States had increased by 50 million people, and the first of the Millennials were ready to start claiming their future. They were in the same position as were the last of the Boomers 20 years earlier, except for one big difference: There is a demographic wall in front of the Millennials.
They do not have the open opportunity that the Boomers enjoyed. 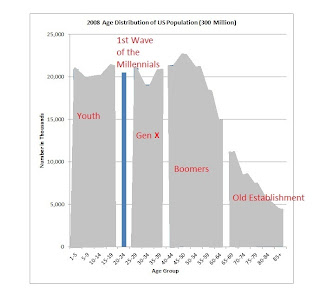 The Millennials will inherit from the Boomers the legacies of their cumulative environmental impact and a large financial debt.
The stark reality is that the environmental and fiscal deficits that enabled the false prosperity of the Modern Era are not sustainable. If they are not reversed within the next several decades it will be too late to escape their toll.
However, the youth of today cannot secure their own future without the cooperation of the adults in front of them. Nor, can they wait until they are the ones in charge because of the limited timeframe available for creating a new sustainable way of life.
With a cap on future growth imposed by the limits of nature, eliminating the ecological deficits and reversing the financial debit can only be achieved by a reduction of past excesses through a decline in the Millennial’s standard of living. This is their price for surviving in the 21st Century.
The difficulty is the Boomers, and Generation Y waiting to take their place, have a vested interest in protecting the wealth and authority afforded by the very political, social, and economic practices that produced climate change and world financial instability.
The solution has to be a joint effort between the Millennials and the Boomers.
The task is no less than The Boomers and Millennials mutually rejecting the status quo, and fully engaging in a civic dialogue to fundamentally restructure our current political, social and economic institutions.
Yet, over the short life span of the Millennials, the nature of civic engagement and civil communication has changed more dramatically than at any time since the invention of the Gutenberg printing press over 500 years ago.
Bridging the generational digital communication gap is an urgent responsibility for all of us:
The Boomers need to understand they cannot take “America Back” ideologically. Today’s vision must be global, digital and evolving (not national, written and definite). Creating a new “American Dream” must be based on premises that reflect that vision.
Generation X needs to stop waiting in line behind the Boomers and go to the head of the emerging line of Millennials and start to lead the way. Their future is behind, not in front, of them.
The Millennials need to become audible to the others, not just digitally to each other. That is what their age cohorts in the rest of the world are doing.
This is the Millennial Challenge. It is for all of us.
_____________________
Professor Renner teaches in the Honors College at the University of South Florida. This essay is based on his podcast series at: www.kerenner.com
Posted by Edward Renner at 10:58 AM No comments: