Take It To the Limit (One Last Time)

Taking It to the Limit
(One Last Time)
Edward Renner
The current controversy over constructing a pipeline to bring Canadian tar sands oil to Texas for refining is political posturing which confuses the real choices before us and the rationale for them.
President Obama has temporary blocked the construction of the pipeline citing environmental concerns. All the Republican president candidates have pledged to construct the pipe line to provide American jobs.
Both are missing the point.
The story of grounding the Concorde jet in 2003 provides a broader perspective. For over 2,000 years humans could not break the speed barrier of 20 miles per hour for group travel. Then, in 1978, after less than a century of aeronautics, it increased to 1,614 miles per hour. After nearly three decades of service, the Concord was grounded because the cost, noise and infrastructure were socially, politically and economically too expensive to be sustainable. A human “Limit” had been breached. A deliberate choice was made for speeds slower than the sound barrier. 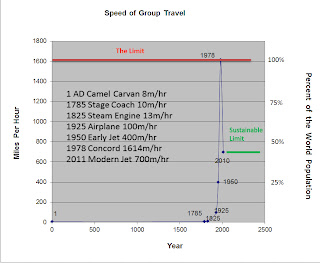 In addition to human limits, there are natural limits as well. Trees require a minimum number of thermal units per year to survive. The number of thermal units decreases at higher levels of elevation and degrees of latitude north or south. Thus, we have a visible tree line near the top of a high mountain and at extreme latitudes.
The most important natural limit facing humanity today is the amount of CO2 (greenhouse gases) in the atmosphere. For over 2000 years before industrialization the number of units remained constant. Since then, CO2 emissions have shot upward similar to the speed of group travel. 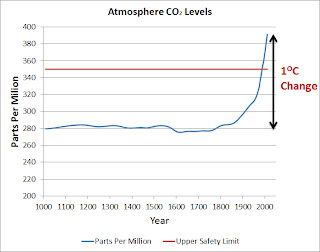 Greenhouse gases trap heat in the Earth's atmosphere producing global warming, which – like the tree line -- alters whether people, as well as trees, may continue to live. If we cross this natural limit, much of what is now prosperous land will be either barren or underwater.


The social and political response to limits is to regulate our behavior.


At the United Nations Summit on global warming the nations of the world agreed that the emission of greenhouse gases must be reduced to a level where global warming does not exceed 2°C. Since the start of the industrial era we have increased global temperature by 1°C. We are half way to the limit. To stay under this natural limit we must not release any more than 565 additional gigatons of carbon between now and 2050. That number is our carbon budget, similar to a personal financial budget for living within our income.


In the first decade of the 21st century we emitted 321 gigatons of carbon. If we continue at that rate for 18 years we will cross a tipping point. Exceeding the 565 gigaton limit will set in motion over the next several decades an irreversible increase in global warming toward 2°C. Irreversible because once greenhouse gases are emitted, they dissipate very slowly.


The urgency of a reduced carbon diet can be illustrated by comparing the rate of increase in the World’s population with the speed of travel. Crossing the red line – the limit of 2°C -- will reduce the capacity of the planet to support its population of 7 billion people to a smaller, sustainable limit. Within our lifetime a large percentage of the population will either die as a direct consequence of climate change or from fighting over insufficient supplies of food and water.


As the end point, CO2 emissions will be dramatically reduced. Over several centuries the concentration of CO2 will decline, nature will reach a new balance, and the survivors may begin again the grand experiment on applying the power of intelligent life for the preservation of the human condition.

The currently known carbon reserves -- such as the Canadian tar sands oil -- are five times larger than our carbon budget for the next 40 years. We do not need to discover new carbon reserves, do deep water drilling, mine “cleaner” coal or build the pipeline.


The missing point is: Most of the coal and oil that we already know about has to stay in the ground for us to live within our carbon budget.


The pipeline jobs are the equivalent of building a casket for yourself, your family and your neighbors to use within our lifetime. We will all benefit from investing all of our venture capital in alternative energy sources, providing even more viable new jobs for living Americans, and for their children.