Living in the Future Tense, Chapter 17.2: Knowledge and Information and the Human Condition

For 5,000 years, humans lived in the past tense: “Yesterday was the same as tomorrow.”  Elders had a lifetime of personal experiences and they maintain the oral history of the society. They were the keepers of the existing knowledge and wisdom that provided meaning to their lives. This meaning was mediated by leaders who were seen to have the capacity to communicate with the Gods who were responsible for their external fate at the hands of nature. This imperial wisdom dictated the human condition for most of human history.

For the next 500 years people lived in the present tense: “Today can be whatever we want it to be.”  Roughly from 1500 to 2000 A.D., humans made a gradual but incomplete transition to living mostly in the present tense. The transition started with Columbus and Copernicus who showed that the earth was round and that the sun, not the earth, was at the center of the universe, which we now understand to be the solar system.

Increasingly, scientific information created alternative belief systems about the purpose and meaning of human life. Human fate was seen to be less at the mercy of the gods, and increasingly as a function of human ingenuity and instrumentality. The nation state came to replace the church as the principal keeper of the knowledge and information which dictated the human condition.

But now, for the next 50 years, we must start living in the future tense: “Tomorrow’s social, economic and political constraints must become today’s reality.” We must live today as if it where tomorrow or else there will be no tomorrow for our children. There are still vestiges of living in the past tense with their roots in religion, as well as global economic, political and social institutions rooted in the nationalism of the present tense. This time, however the transition must occur over the time span of an individual lifetime: that of the millennials. The Millennial Challenge is to reconceive our collective body of knowledge and wisdom for living peacefully and sustainably on a crowded planet in the 21st Century as the new defining moment for the human condition.

The Millennial Challenge
When we lived in the present tense under the umbrella of the nation state, the human conditions were largely dictated by the time and place where any given individual had the fortune or misfortune to happen to live. What makes this transition – The Anthropocene -- unique is that nature itself is at the mercy of human activity rather than the reverse as it has been in the past. 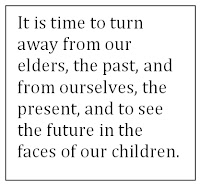 As a result, the major populations of the world must within the period of a single life time come to share a mutual understanding that civilization as we know it is at risk. The challenge is essential although seemly impossible. Yet, there is a precedent: In 1982, one million people demonstrated in New York Central Park against nuclear weapons and for an end of the arms race. The powerful nations of the world backed down from the arms race of the cold war with a series of disarmament and nonproliferation agreements that dramatically reduced the stockpile of nuclear weapon, all within one lifetime. There is reason for hope.

The Role of the United States

The first order of business is to put to rest the dominate economic and political ideologies upon which living in the present tense has been based: consumerism, deferred environmental costs and continuous economic growth, as well as tax reductions, reduced government regulation and limited roles for government. Among all of the nations in the world, the United States has exemplified and set the standard for living in the present tense. As such, the United States has a special obligation to lead the transition toward a new alternative.

Living in the present tense was a grand experiment, but we now know that it is not sustainable. The question is whether the Unites States in the midst of its affluence can reconceive itself as essential for its own survival. This will be a crucial test of whether the democratic process which provided the freedom for capitalism to thrive has the capacity to be self-correcting when it has sown the seeds for its own limit.

Relinquishing the Past Tense

The second order of business is relinquishing the residual elements of living in the past tense. There are still those who believe in a past in which intermediators with God dictate the human condition.

Spanish conquistadors were bound by the king of Spain to read “The Requirement” to all foreign people, in order to give them a chance to submit, before attacking them. It informed foreign powers their lands had been donated to Spain in 1493 by Pope Alexander VI. Thus, as an agent of the one true God, the conquistadors gave indigenous people the opportunity to submit to the obedience of the Pope and the King of Spain (Ronald Wright, Stolen Contents).

Today, there are Christian candidates for the presidency of the United States and Muslim Jihadist who, based on such articles of faith, are engaged in a modern reenactment of 1493. This residue of religious wisdom has survived relative unscathed five centuries of human intellectual progress. The political, economic and social ideologies of the past and present are dead ideas as alternatives to the knowledge-based rational civic discourse required for living in the future tense.

The third order of business is dealing with our beliefs about knowledge and wisdom itself. If knowledge becomes a commodity, as land was when people lived in the past tense and as natural resources are for those of us living in the present tense, humans will lose the capacity to claim a sustainable future for their children. There is no longer a time or place for ideological posturing. The Modern Era has provided us with the scientific information we need to shepherd the very plant on which our lives depend. If we fail, it will not be because we did not know better. 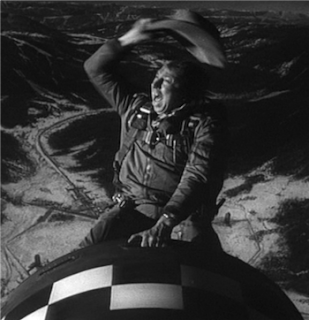 In Dr. Strangelove, the 1964 black comedy on the nuclear age, a fanatical US general launched an air strike against the Soviets which, if successful, would have unleashed a “doomsday device.” The air strike was averted, except for one B52 bomber which avoided interception. When the bomb door jammed, Major Kong manually released the mechanism and, cowboy hat in hand, rode the bomb to the ground, setting off Armageddon and ending civilization on earth as we know it.
Thanks largely to the UN, humanity has found a way so far to live under the mushroom tree, albeit imperfectly. The new challenge for the United Nations is to once again find a way to avoid the end of civilization as we know it, but this time due to environmental and societal collapse. The task will be no less easy or less expensive than ending the Cold War which made Armageddon a real possibility. Unfortunately, the spirit of Major Kong is still alive and well, cowboy hat in hand, recklessly calling for military solutions to the early warning signs of the global deterioration of the human condition. Avoiding creating a modern Mad Max military response to global collapse will require new principles for reconceiving how to address the effects of human activity on the planet.

The three principles from the Forms for a Future podcast provide a framework for reconceiving how to live in the future tense. One is political, one is economic and one is social; none alone are sufficient. All three must be considered simultaneously because each is dependent on the other two. If there is any doubt about how to act, think of these three principles:

(1)  World citizenship needs to become increasingly more important than the national citizenships of the world.

The fate of our children and grandchildren is every bit as much, if not more so, at the mercy of stoking a coal-burning economy in the developing nations of China and India, as it is in the domestic decisions made in Washington. Consider a ring of concentric circles with the individual at the center, with “we” the next circle extending through local, state, national and global as successively larger circles. In the very distance past, the individual mattered most, with significant help from the others who were physically very close by; global was irrelevant. We are approaching reversing that order. I would like to see the United Nations offer a certificate of dual world citizenship to every person in the world as an opportunity to act as part of a world community. Personally, each of us can think and speak in our duel role as citizens of a nation and also citizens of the world, even without a formal world citizenship document.

(2) We need to increasingly put our trust in the power of balance rather than winning or owning the balance of power.

Using the accepted world statistical standard for low wage jobs (less than two-thirds of the national median wage), the United States has the largest percentage of its workforce in low wages jobs and pays its low wage workers the lowest percentage of the median wage of all the OECD countries. A person can accept someone having two homes as long as everyone has a least one, but it is not acceptable for a bank to be too big to fail and a person too small to matter. Nations can accept differences in absolute wealth as long as there is not famine, migration and civil disorder. The power of balance is a necessary self-imposed limit on economic inequalities and political policies that consciously discards some lives as less important. It is the role of governments to be the keeper of this balance within their domestic authority, and to restrain their aspiration to be the final authority on world affairs through superior military power.

(3) We need to increasing treat all knowledge and information as belonging in the public domain, not a commodity for financial gain.

The availability and application of existing knowledge and information for improving the human condition are more important than creating ever more new pills, gadgets and consumer goods that only the wealthy can afford. In the past, owning land and natural resources, such as oil and water, has been the means to wealth and power. While intellectual property rights might seem like a natural extension of land and resources as the means for gaining wealth and power, shorting knowledge for financial gain will condemn the human condition to lacking the capacity for living peacefully and sustainably on a crowded planet.

In practical terms this means reducing copyright and patent protections, not increasing them as we are currently doing in our “free trade” agreements. In terms of the general disruptions produced by the digital information age, this means the financial savings generated by the displacement of human labor and judgement by robots and intelligent machines must not go to the owners of the technology, but rather to provide useful alterative social roles with real economic value to those who are discarded by it. The cumulative benefits of knowledge and information must now be democratized to include everyone. The human condition is not for profit if we are to live in the future tense.

It is time to turn away from our elders, the past, and from ourselves, the present, and to see the future in the faces of our children. This is the Millennial Challenge, and we have one lifetime to accomplish the transition, globally. What an exciting time to be alive.