The Fantasy of Life in a Fact Free World

Adapted from Chapter# 14, Living in the Future Tense

The End of Truth:
The Fantasy of Life in a Fact Free World
Edward Renner

We know from archeology that whole societies have collapsed in the past. Then, they had the excuse of not knowing any better; that is no longer true. The paradox is that the more we know, the less knowingly we are living our lives. How can the Information Age also be the Age of Stupid? 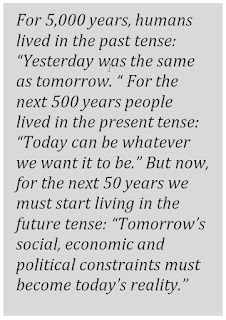 In the past, a societal collapse was sometimes initiated by a lifestyle that overused the natural resources necessary to sustain their population as in Easter Island. At other times it was due to an external catastrophe such as the role of drought in the Maya collapse, or a conflict between people that could not be resolved politically as in Nordic Greenland. Regardless of the initial cause they all shared a common factor of an entrenched belief system that failed to see the warning signs. By ignoring truth tellers the societies became the author of their own misfortune.


The most difficult part of human change is letting go of the security of existing beliefs and values to embrace the uncertainty of a different future. The result is often the loss of the capacity to see, hear or speak the truth.

We have not yet learned that lesson. The challenge of our time is how to live sustainably and peacefully on a crowded planet in the 21st Century. This will require alternative economic, social and political process. Instead, we are persisting in pursuing the fantasy of narrow, single-minded ideologies based on economic growth, consumption and nationalism.

The dilemma of the necessity to embrace the uncertainties of a global community without the capacity to change is a prescription for either mutual environmental collapse or internal civic disruption and external conflict between nations and regions over who will be forced to abandon their aspirations and accept harsh austerities.

We need a global energy initiative and an alternative sustainable global economy, not ideological wars in Washington over global warming and, in the Middle East, over securing Western influence and the New American Century. Our invasion of Iraq and the Arab Spring did not bring democracy to the Middle East; indeed, just the opposite. 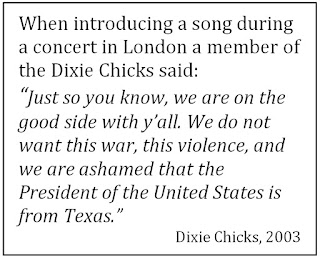 The Iraq war has spread into a regional conflict and growing sectarian divide. The Islamic State (ISIS) now controls large areas of both Iraq and Syria. The US and its Gulf allies are providing arms to the rebel forces in Syria while Russian and Iran are supporting the Government of Assad. In Syria alone, 12 million people have been displaced, 300,000 killed and 4 million have fled the country creating a world-wide refugee crisis.

Three trillion dollars later, and still counting, the war without end continues. The national debt has soared without – for the first time in the history of the US – a war tax increase to pay the cost. Instead, the debt has been thoughtlessly passed on to our children who will have no realistic way to deal with it. The physical infrastructure required to be competitive in a global economy has been allowed to decay, and the social programs necessary for a strong functional democracy – education, health, economic security and poverty assistance – are collapsing. The nation is divided with racial and ethnic tension while the level of poverty is increasing. 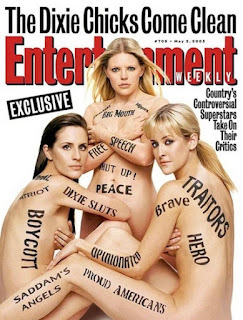 “The public backlash against the Dixie Chicks for speaking their mind about the war was vindictive.  Country station stopped playing their music. The Dixie Chicks did not back down; they answered their critics with a cover picture on Entertainment Weekly.  A picture that then Managing Editor Rick Tetzeli (2002-2009) regards as his favorite cover – an endorsement of the right – indeed the necessity -- to speak to truth.

In the end, they were proved to be right. But, their career was over for saying they were ashamed the President was from Texas!

What has gone wrong in our country?

Speaking the truth has lost its currency, politically, economically and socially. Political Action Committees (PACs) have reduced civics to marketing and politicians to puppets. Eleven million VW cars world-wide lie about their emissions and those who perpetrated the financial crisis of 2008 knowingly said to each other at the time: “You will be gone and I’ll be gone.” To complete the circle, wealth and income inequality have placed power in the hands of the super wealthy who own the PACs which serve their own private, not public, interests.

The commercial consolidation of the media and journalism, and the commodification of higher education, is silencing the last frontier of truth telling. Each episode of terrorism increases our willingness to accept more intrusive surveillance and limits to privacy as a necessary sacrifice for keeping freedom and democracy safe.

Those who speak to truth are not answered with substance, but are labeled as dangerous. Chelsea Manning is imprisoned, Edward Snowden and Julian Assange are living in exile as criminals for revealing failures of public trust by the very government whose essential function in a democracy is the keeping of that trust. We are withdrawing into the fantasy of living in a fact free world, where repeating ideological myths of greed, patriotism and hate have displaced civic political discourse.

When societies have collapsed in the past it was because they silenced truth tellers by holding on to the false security of ideologies until it was too late for change. This time, it not just the collapse of the US that is at stake, but of the planet itself. And, it all started back in 2003 when we stood by in silence and watched while the Dixie Chicks were sacrificed to the patriotic fantasy of the exceptionalism of the new American Century.

Maybe it is time for a Dixie Chick reunion concert. We owe them one. 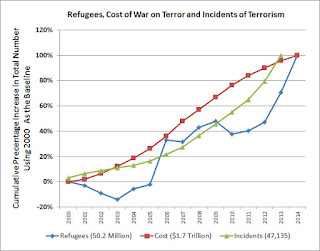