Cheap and Fast Trade-off for Quality

When Fast and Cheap Is Not Good Enough
Edward Renner

As a boy, I knew that my grandfather respected the John Deere dealer. At 15 I got my first job in agriculture. A John Deere tractor did the heavy work. Although I lusted to drive it, I was never allowed to do so.

My chance to own my tractor came when I purchased 3 acres in western North Carolina. As an urban back-to-the-lander, everything I know about tractors I learned from Keith, who runs a small engine repair shop near Hendersonville North Carolina. His specialty is to fix and resell used tractors.

I now know that my grandfather’s deep sense of loyalty and respect for the legacy of John Deere was well deserved.

In 1933 when small farmers were losing their land, houses and equipment to foreclosures, the exception was tractors financed through John Deere. The company, though losing money itself, told farmers who owed them money to keep the tractors and pay as much as they could when they could. The nation needed food, and the farmers needed their tractors.


But it is not 1933. The small farmer with his own tractor is a thing of the past. In 2000, John Deere obtained a banking license in Luxembourg giving it the ability to finance the sale of large equipment used by corporate agri-business throughout Europe. In 2012 it celebrated its 175 anniversary with record sales of over $36 billion.

In 2003, not to be closed out of the small rider mower market by cheap garden tractors from China, John Deere sold the use of their label to Home Depot. Now, you too can have a John Deere label for a two hundred dollars premium price, but other than the green and yellow paint it will be just like the ones for sale beside it with a 500-hour life expectancy before major repairs or replacement is required.

But this essay, like most legends, is not just a story about tractors. The John Deere legend is about the political and social consequences of achieving cheap prices and easy access at the expense of reduced quality. What economic globalization has created is the 21st Century mind-set that fast and cheap is an acceptable trade-off for quality.

John Deere is not alone. Levis did the same thing for Wal-Mart, as other brand names have done for big market retailers. This is the new normal.

The modern way to make a profit is by shifting the commercial focus from quality and customer loyalty to cheaper prices and more accessible markets. While this may serve the financial returns of global corporations in the short term, it is not necessarily in the best long-term interests of individuals, the nation or sustainable living on a finite planet.

But, the potential damage is magnified when this global economic mindset also intrudes into the political and social aspect of our lives. In particular, that a cheap (lower taxes) smaller (fewer regulations) government is also best for our general wellbeing. 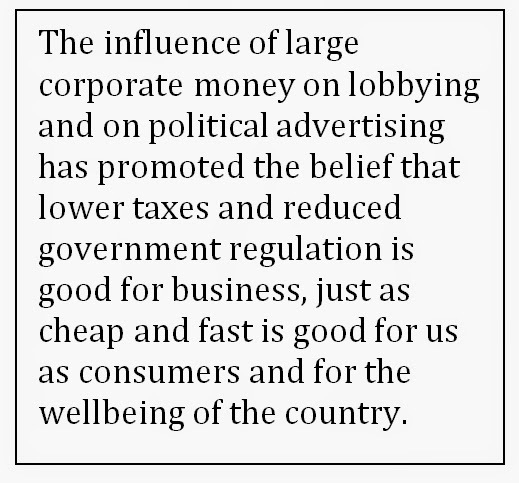 If we insist on lower taxes and smaller government with fewer regulations we will not have effective food inspections, air traffic controllers, parks and recreation, affordable public education, and all of the other services that living in a complex global world requires. Adequate taxes, effective government and a high level of social wellbeing are each fully dependent on the other two.

What would have happened in 2008 if the Bank of America had said to the people who had lost their jobs “keep your house and pay what you can when you can”?

The John Deere legend perhaps explains why I bought a 15 year-old garden tractor manufactured in Kentucky for which I was able to download a complete mechanical schematic and parts list. This summer it hauled 5,000 pounds of gravel, mowed my field and carried logs from the forest for firewood.  Last week it wouldn’t start. I replaced the ignition solenoid for $14.03 plus shipping and it is working fine again. With the exception of an occasional replacement part, I expect it will see me out, thanks to Keith, unlike the one I might have bought new from Home Depot.

Fast and cheap is not a substitute for quality, either for us as consumers or for our government. Two out of three is not good enough.