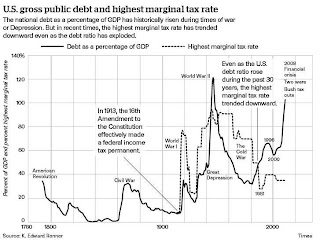 Each time, after the external situation was over, the nation significantly reduced the relative level of debt, not by eliminating it, but by increasing our wealth so that it became affordable.
During and after World War II everyone pitched in to help support the war effort through savings bonds, rationing, recycling and a frugal lifestyle; and, later, through endorsing a progressive income tax in which the highest marginal rate remained around 80-90%. The revenue built our national infrastructure, generated jobs, created Medicare and a widely shared level of middle class prosperity.
By 1981 our debt to wealth ratio returned to roughly what it was at the time of the American Revolution, even in the face of the “Cold War.”
However, in 1981 we started a new uncharted economic policy based on the theory that the size and scope of the post-WWII involvement in our economy by government was bad for the nation and for the American people.
The highest marginal tax rate was dramatically lowered under the assumption that providing additional income for the wealthiest, and the deregulation of business, would stimulate even greater economic growth.
The theory was that the benefits would trickle down to the workers below and that there would not be any need to cut government social programs because the additional wealth would provide the revenue to replace that lost through the reduction in taxes.
We now know that the theory was wrong.
The relative reduction in revenue resulted in a rapidly increasing national debt ratio. The money never trickled down, even though productivity went up due to new technologies and globalization. The economic gains were not shared, the wealthy got wealthier while the relative debt rose.
The end of the Cold War reduced the need for defense spending, and a modest increase in the marginal tax rate added additional revenue. This provided a brief period of national prosperity and a decline in the relative national debt from 1996 to 2000.
Then, this changed again. In 2000 we returned to the economic policies of 1981 of additional tax cuts for the wealthy, and further deregulation of corporate economic activities by the government, with the same results as before —  a huge increase in the national debt to wealth ratio.
But, the difficulty did not stop with the large debt resulting from the tax cuts and the financial bailout of Wall Street. It was compounded by invading Iraq and Afghanistan. We were not asked by government, as we were in World War II, to pay more taxes, ration gasoline and to reduce our excesses. Instead, we were told to go shopping!
Only now can we see the true price of those wars. They alone are a $3 trillion contribution to the national debt.
Yet, the current solutions enacted in Washington are more severe forms of the theory that produced the problem in the first place. They pass the costs of reducing the debt on to the average person rather than to those responsible for the problem.
We can either renege on a 70 year old commitment by the government to our citizens to protect their retirement, health and general welfare; or, we can, once again, make our debt affordable by increasing the highest marginal tax rate, end the tax cuts for the wealthy, restore government taxation and regulation of corporate economic practices, put an end to the two wars, and to start paying for them now.
Our choices are that simple.
[1] Professor Renner may be reached at kerenner@ usf.edu. The podcast series on which this essay is based is also available through the University of South Florida at:
https://learn.usf.edu/webapps/lobj-podcast-bb_bb60/feed/IDH3400.004S11/podcast.xml
Posted by Edward Renner at 10:52 AM